I watched Ree Drummond, aka “The Pioneer Woman,” make this recipe “Steakhouse Pasta” on the Food Network Channel. Quite literally, my mouth was watering. I strayed from Ree’s recipe a wee bit based on ingredients I had on hand.

Rather than skirt steak, I had a package of chuck steak in the fridge waiting to be transformed. The steaks were only $3.69/pound at the grocery and Richard loves chuck steaks although I rarely buy them. In the “Wayback Days”, my dad used to buy chuck steak not for a family meal, but for his cherished buddy, Harry, his dog. Harry was spoiled and happy.

I also added some fresh mushrooms and used frozen chopped spinach instead of fresh. Ree’s recipe calls for crumbled blue cheese. I opted for freshly grated Parmesan and cream cheese. The Pioneer Woman was shooting for a steakhouse-like pasta dish, thus the blue cheese, spinach, and horseradish – all steakhouse classics. And she uses pappardelle, which is a wide pasta – wider than fettuccine. I had linguine on hand so that’s what I used.

I must say that this was an easy and delicious dish. Plenty of creamy, cheesy sauce punched with a flavorful variety of veggies for the pasta. And the grilled steak that goes with it is perfect, even if it was chuck steak which turned out to be flavorful and tender. No wonder Harry was so happy!

Let’s Make Some, Shall We?

First thing, fill a large pot with water, cover, and bring to a boil. This is for the pasta. Be sure to save 1-2 cups of the pasta water after cooking to use for the sauce. Prepare the pasta while you’re cooking the sauce. If you’re using frozen spinach, thaw it in the microwave for 45 seconds, drain it, and squeeze it dry using paper towels. 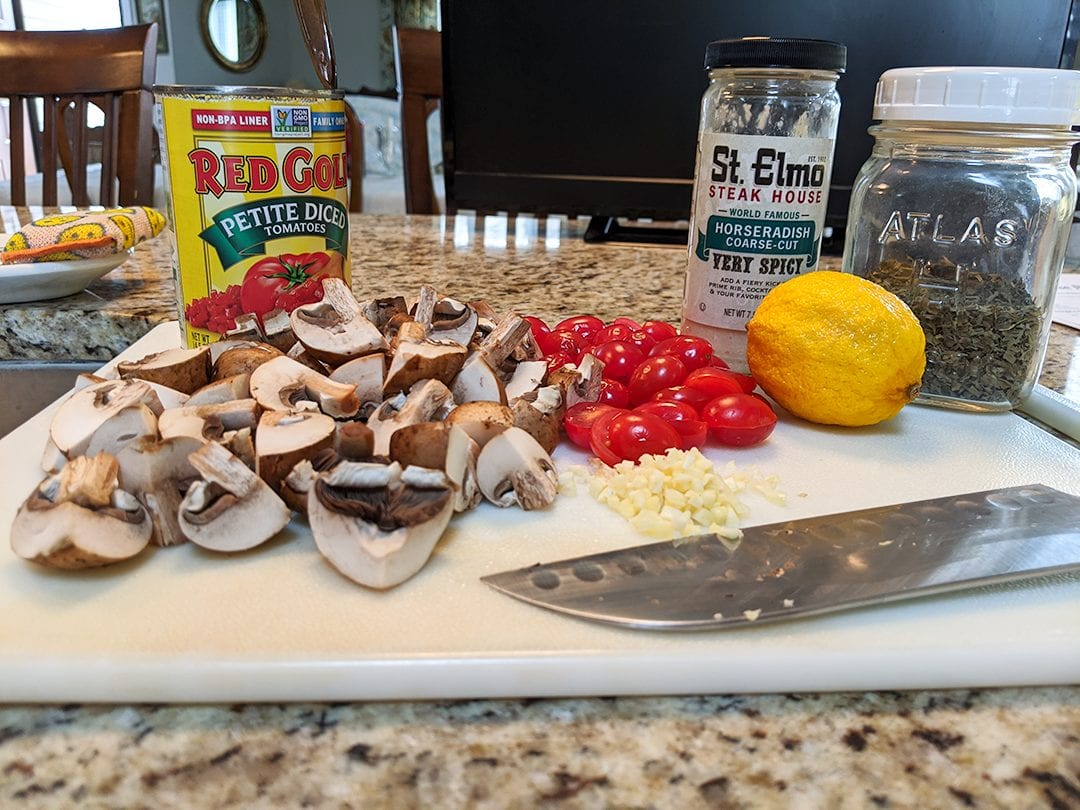 Here are all my lovely assembled ingredients for the sauce except the heavy cream and half-n-half. I had a partial container of cherry tomatoes in the fridge, so I halved them and threw them in with the canned tomatoes. I quartered baby portobello mushrooms – I use portobellos because I think they have more flavor than white buttons. Notice there are no onions used in this sauce. However, I wouldn’t judge you if you threw in 1/2 a diced or sliced onion. 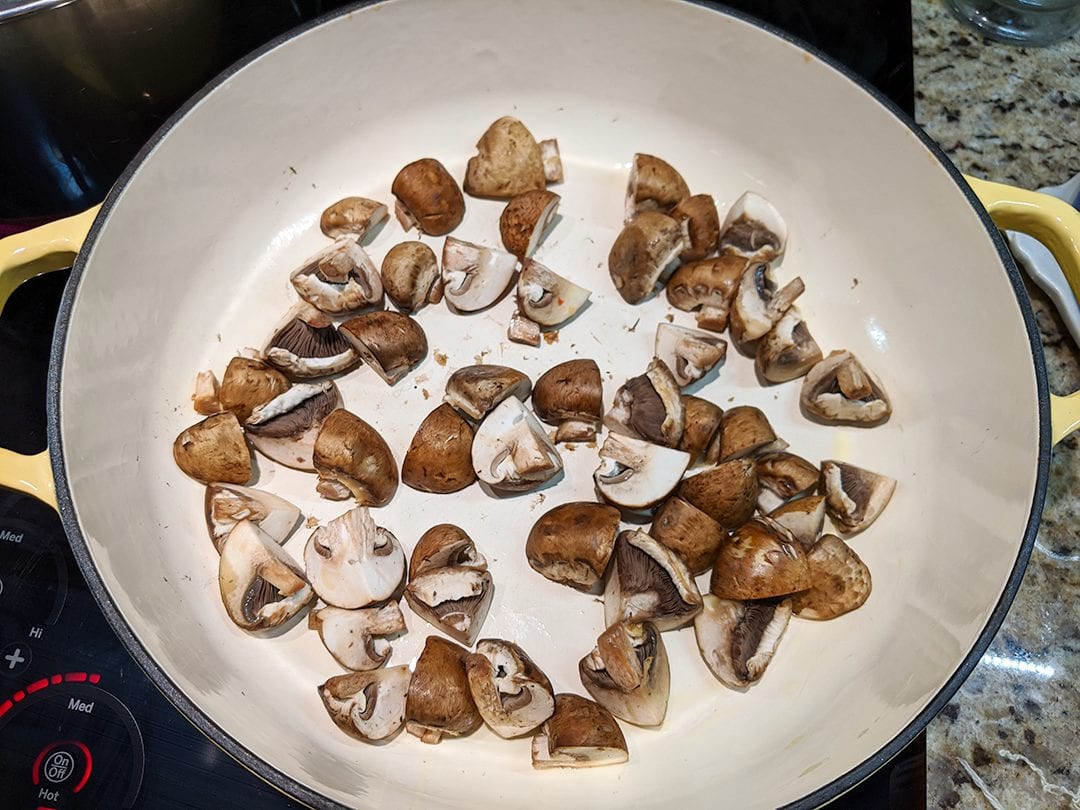 Next, in a 12″ heavy-bottomed skillet over medium heat add one Tablespoon olive oil and the mushrooms. Stir the mushrooms around for 5 minutes or so until they begin to soften and brown. I don’t use lots of oil when I brown mushrooms. I like to heat them up so they release their liquid and the liquid reduces a bit. I think it adds a little umami to a dish. Mushrooms are perfect to add subtle flavor.

Add the minced garlic to the mushrooms and stir for one minute or less until the garlic becomes fragrant. 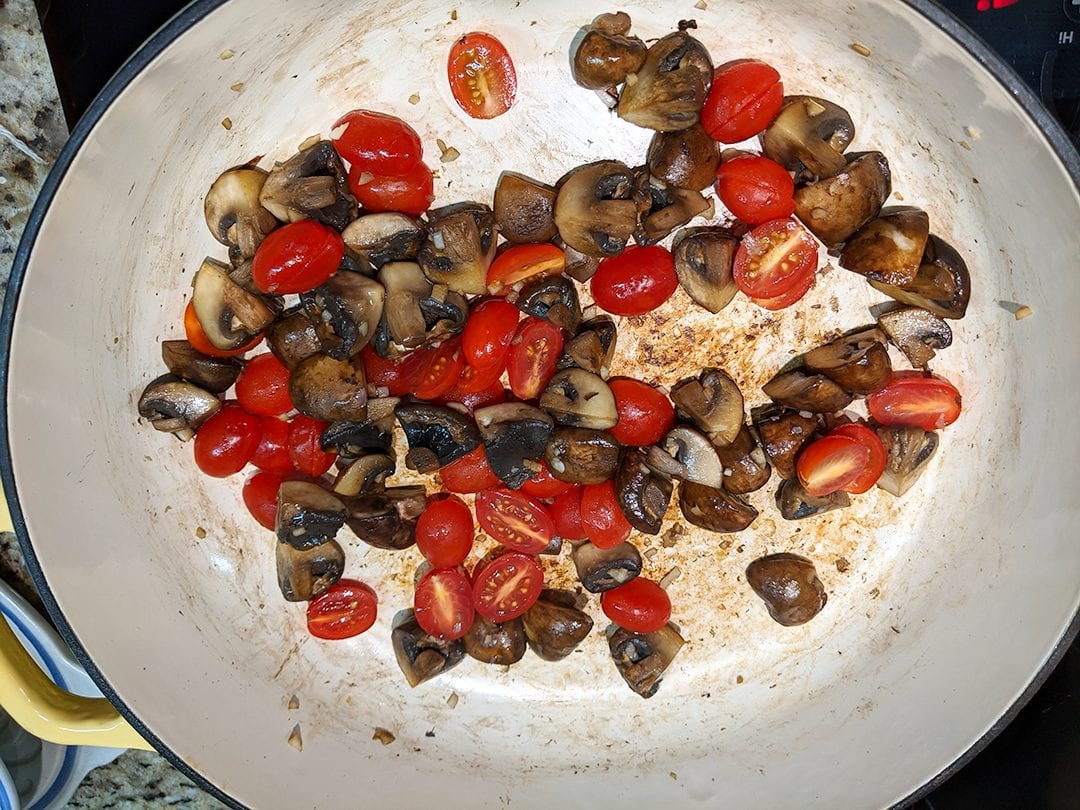 See how the mushrooms cooked down and left flavorful browned bits at the bottom of the skillet? Lovely. Add the halved cherry tomatoes, if using. Stir and cook until the tomatoes just begin to wilt. Then stir in 1/2 cup of white wine or chicken stock. Bring to a gentle simmer and continue to cook until the liquid is reduced by half. Quick – 2-3 minutes. 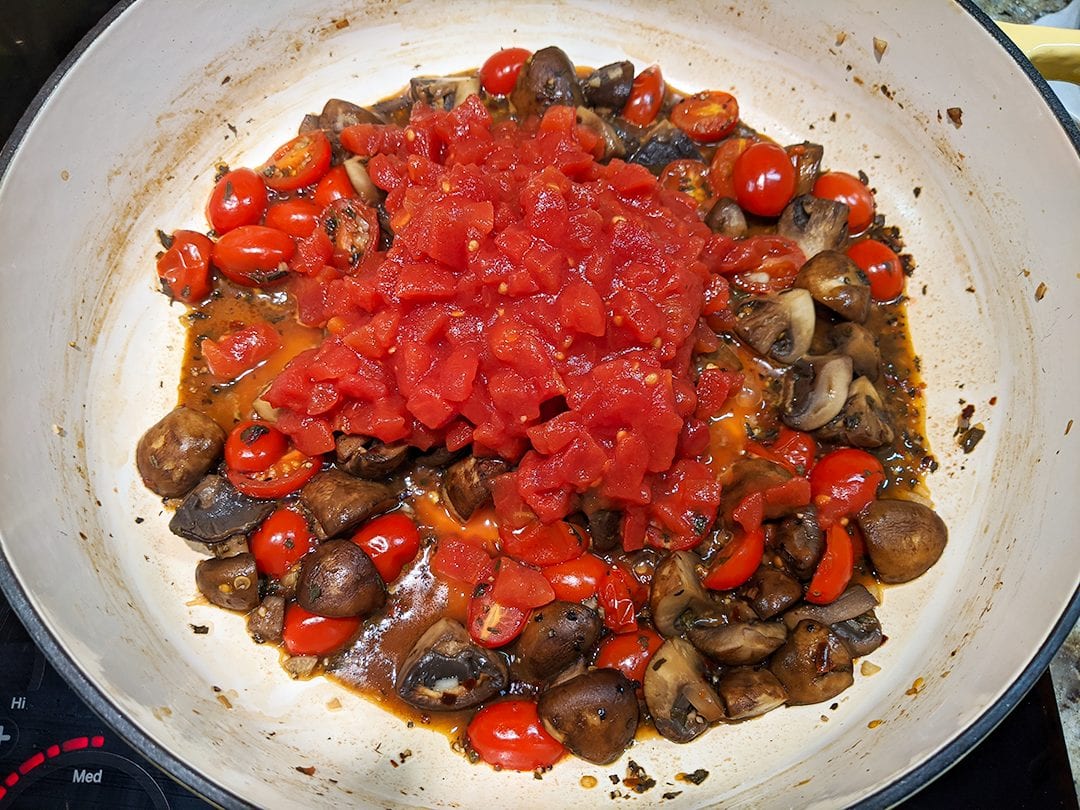 Add canned petite diced tomatoes with their liquid along with 1/2 Tablespoon dried basil, 1/2 teaspoon granulated sugar, and 1/4 teaspoon crushed red pepper. Bring to a gentle simmer and continue to cook for 10 minutes or so stirring every once in a while.

While the sauce is cooking, it’s time to get the steak ready for the grill. My chuck steak was thin enough, 1/2″, that I cooked it quickly on our gas grill, but you can easily use a grill pan or large skillet on top of the stove. Sprinkle the meat with a little salt and pepper on both sides. When your grill or skillet is hot, sear the meat for 3-4 minutes on both sides for medium-rare. When done, remove from heat to a plate and loosely cover with foil until you’re ready to serve. 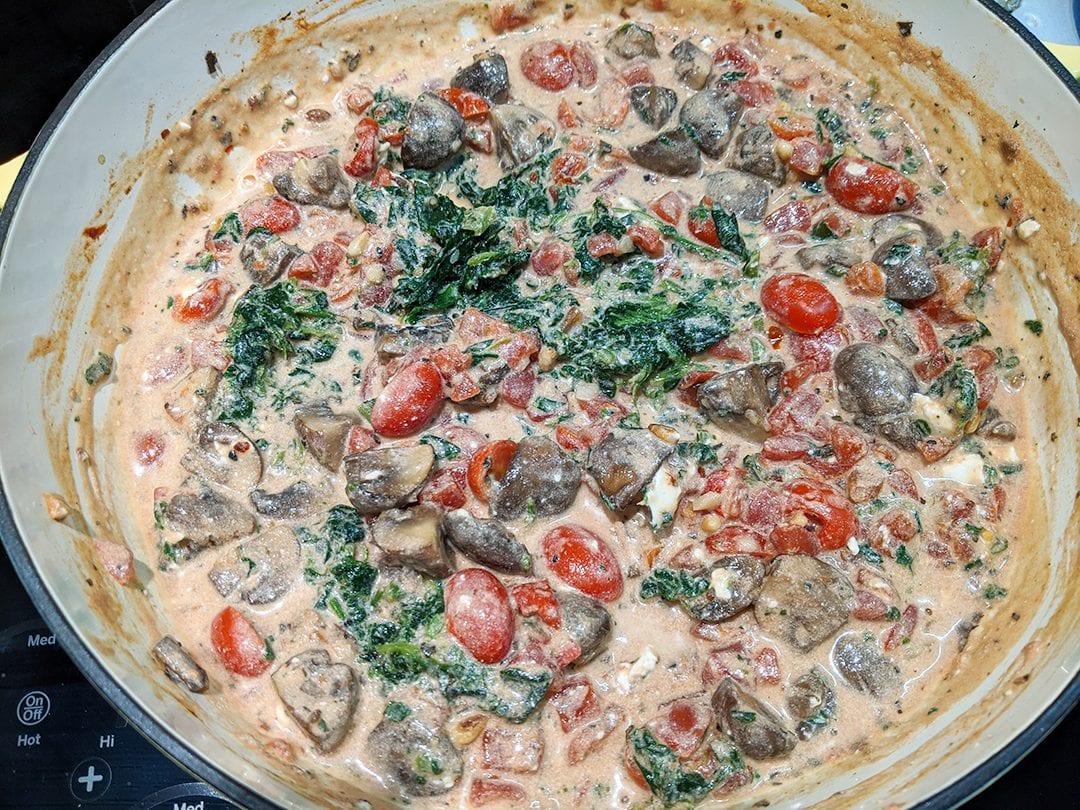 Here’s the finished beautiful sauce and how to make it: 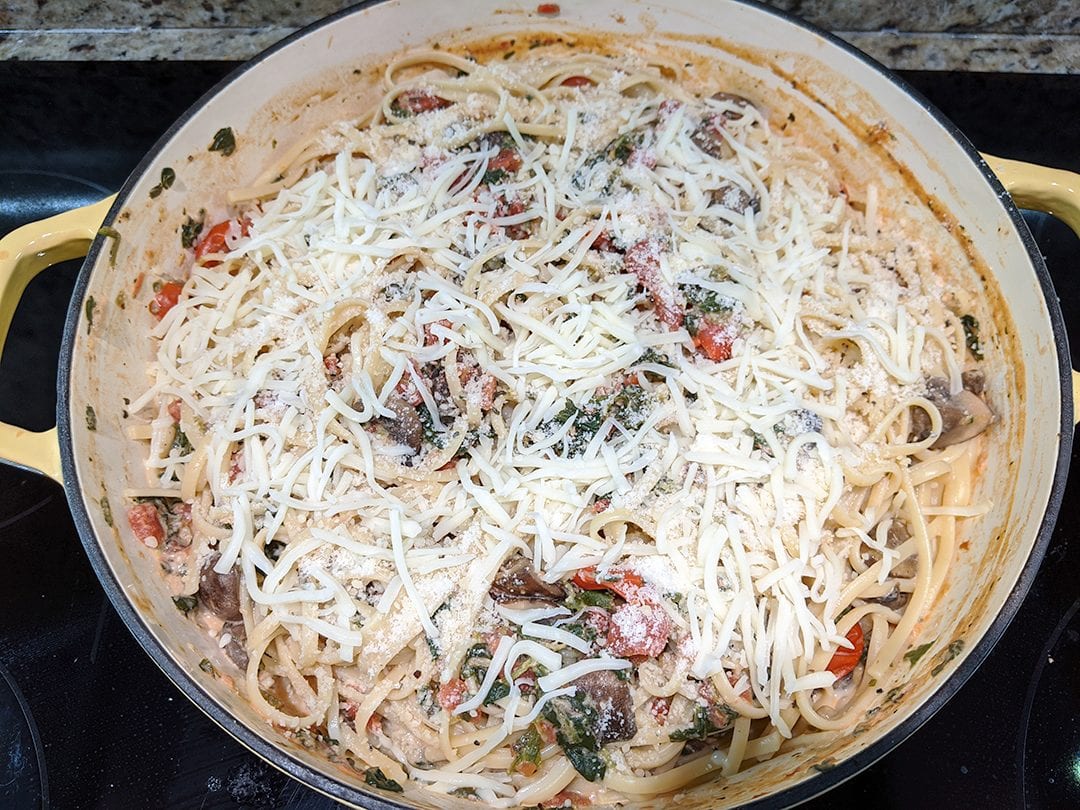 Add the cooked, drained pasta. Using tongs, toss everything together until the pasta is well coated. You may have to add some of the pasta cooking water to help loosen the pasta – I find doing so actually makes the pasta sauce creamier. I topped my finished pasta with shredded mozzarella cheese – why not?

Slice your steak into strips and serve on top of the pasta or serve into individual pasta bowls with steak on the side like I did here and top with more freshly grated Parmesean at service.

And there you have it! This dish is filled with flavor from all the vegetables and cheese, and so satisfying.
Thanks, Ree, for your inspiration! This recipe is going on my regular menu rotation!

Feel free to substitute 1/2 cup grated fontina cheese for cream cheese. You may use 1 cup half-n-half in place of 1/2 heavy cream and 1/2 cup of half-n-half.